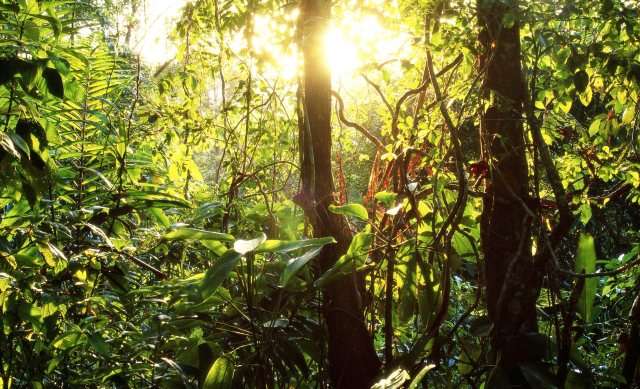 It seems that Dubai will see its first rainforest, as plans are afoot by Damac Properties to incorporate one in its latest development – Akoya Oxygen, encompassing 55 million sq ft. The developer will try and replicate the eco-system in the desert by the use of numerous plant species with the dome man-made jungle slated to become a big tourist attraction.

This Saturday, Emaar – in a JV with Meraas Holding – will launch Acacia at Park Heights, in Dubai, Abu Dhabi, London and Karachi. Located in Mohammed bin Rashid City, the Dubai Hills development includes a championship golf course and will house 479 apartments – with no prices yet available.

Texture Global Investments has bought Union Properties’ Auto Mall development, covering 450k sq ft, for US$ 143 million. The troubled developer will use funds raised from the sale for “other development streams” which could mean phase 3 of Green Community or a proposed 4-star, 150-key hotel in Dubai Investment Park.

The Minor Group has joined forces with Dubai Properties to develop the Anantara Creek Hotel, due to open in 2018. The Thai-based hotel management company has indicated that the 290-room luxury property will be the first to be located in the new Culture Village and will have a waterfront setting.

Yet another major boost for a British related company – Al Futtaim Carillion has won two Meraas contracts. The first, valued at US$ 350 million, is for a Dubai Creek waterfront mixed use development and the other, for La Mer at Jumeirah, for US$ 240 million, including the creation of a 1km beach.

Arabtec has picked up contracts, valued at US$ 253 million, for work in upgrading facilities for Aramco in Saudi Arabia.

Empower reported a 76.0% surge in 2014 revenue to US$ 409 million as profit surged 65.0% to US$ 112 million. The district cooling services provider acquired Palm District Cooling – at a cost of US$ 500 million from Istithmar World – in late 2013, which then gave Empower  the world’s largest district cooling portfolio.

Dubai Airport Free Zone Authority reported 2014 profits rose by 48.0%, as revenue was up 13.0%, with its total assets rising by 3.4% and office space acquisition by 11.3%. It is estimated that DAFZA contributes US$ 29.7 billion to Dubai’s non-oil trade.

HH Sheikh Hamdan bin Rashid Al Maktoum inaugurated the Mai Dubai  factory – the emirate’s most recent entrant into the bottled drinking water market. The company is a subsidiary of DEWA, which currently has an installed capacity of 470 MIGD of desalinated water so will have no problem with supplying the new entity.

Emirates is planning a 5-10 year US$ 1 billion sukuk which will be backed by the UK Export Finance – a body that seems to be becoming more active in the region. Two Dubai banks, Emirates NBD and Dubai Islamic, are part of an 8-bank consortium arranging the facility.

Whilst it is no surprise to see that Emirates is considered the most valuable regional airline brand, valued at US$ 6.6 billion, it is one that it only makes 196th in the 2015 Brand Finance Global 500 report.

Government-owned Dubai Aerospace Enterprise is reportedly selling its services facility for over US$ 1.8 billion. StandardAero, based in Arizona and is involved in repairs and maintenance, was bought by the Dubai company in 2007 for US$ 1.8 billion, in a deal that also included Landmark Aviation.

An Investment Corporation of Dubai entity, Emirates National Oil Company (ENOC), is negotiating a 9-year US$ 1.5 billion finance deal, some of the proceeds of which may be used for expansion beyond Dubai. Its last major investment was seven years ago when it bought 48% of Dragon Oil for US$ 1.8 billion.

To the surprise of many, Dubai is well on its way to becoming the tea capital of the world, thanks mainly to the huge Lipton factory located in Jebel Ali Free Zone. The Unilever-owned facility has seen a 50% expansion since 2010 and now produces the equivalent of 20 billion cups of tea annually (33k tonnes). Coincidentally, its near Jebel Ali neighbour, Al Khaleej Sugar, produces 1.5 billion metric tonnes annually, making it the world’s largest stand-alone sugar refinery.

Dubai-based Abraaj Capital has expanded its interest in the burgeoning Turkish market with a minority stake in Hepsiburada.com, a leading on-line trader. It also plans to buy into that company’s furniture and home accessories subsidiaries, Evmanya and Altincicadde, which would bring its total investment to eleven entities in that country.

Two major Australian companies reported disappointing financials – an indicator that all is not well Down Under. BHP Billiton saw H1 profits sink 31.0% to US$ 5.4 billion, on the back of falling commodity prices, and has cut exploration and other costs by 23.0% to US$ 6.4 billion. Meanwhile, the government-owned Australia Post performed even worse, as  H1 profits sank 56.0% to US$ 77 million, with the distinct possibility of an annual loss at the end of June – for the first time in over thirty years. However, national carrier Qantas did return to positive territory, reporting H1 profit of US$ 289 million, after its biggest ever annual loss for the year ending June 2014.

For wilful and illegal use of three Smartflash patents by iTunes, Apple has been fined US$533 million by a Texan court. Apple will appeal the case which involved accessing and storing downloaded music.

After agreeing, in 2012, to pay the US government US$ 4.5 billion to settle criminal responsibility, BP has lost its fight to reduce the US$ 13.7 billion maximum civil fine it could face following the 2010 Gulf of Mexico oil spill. To date, the oil company has estimated it has incurred costs of a massive US$ 42 billion following the Deepwater Horizon rig explosion.

Over the past month, gold and oil have showed mixed fortunes but YTD are heading north. The yellow metal closed on Thursday at US$ 1,218 per oz whilst Brent Crude was trading at US$ 61.89 /bbl, both up on their 01 January openings of US$ 1,186 and US$ 57.33. Meanwhile, the global share markets continue to show significant gains – including the Dow Jones, S&P 500, NASDAQ, Germany’s DAX, Japan’s Nikkei 225 and the FTSE 100. With low interest rates, and the QE being introduced into the eurozone, this may continue in the short-term but it is obvious that there will be a major correction before the end of the year.

Recent data indicates softness in the US housing market and a slower Q4 expansion (with 2014 growth rate down from 5.0% to 2.6%) despite other positive indicators; these include falling unemployment (with 336k jobs being created monthly over the past three months), positive consumer sentiment and historically low interest rates. This week, Fed chief, Janet Yellen, has been testifying before Congress and although she was concerned with foreign economic developments (including the eurozone and China) and a fragile domestic employment position, analysts do not expect any rate increases until July at the earliest.

Russian debt rating descended to junk status, as Moody’s cut its ranking to Ba1, following S&P’s similar move last month. Most analysts forecast that the country is at the start of a recession that will be exacerbated by continuing low oil prices, a troubled rouble and weak consumer confidence: all indicators are that the on-going capital flight out of the country will continue unabated.

Some Italians will be far from happy with news that the country has signed a bilateral tax information sharing deal with Switzerland. It has been estimated that 70% of cash stashed abroad by Italians is in Swiss banks, costing the country upwards of US$ 100 billion p.a. Any monies collected will help the exchequer to reduce its forecast 2.9% of GDP deficit figure for 2015.

January figures show that eurozone’s second largest economy, France, has seen prices drop into negative territory for the first time in five years. The -0.4% reading is a further problem for the 18-country bloc, with  a 2.0% target, which has just introduced QE to reverse this downward spiral and attempt to boost growth and economic activity.

So as to avail of a four-month bailout extension, Greece finally submitted details of reforms requested by the troika; these include measures to curtail both tax evasion and smuggling, as well as trimming its bloated civil service and fighting endemic corruption. 76% of its US$ 366 billion debt is owed to the troika – EC – US$ 220 billion, IMF – US$ 37 billion and ECB – US$ 22 billion. The country has temporarily escaped Grexit which would have resulted in a run on the banks and state bankruptcy.

After being one of six banks fined a combined US$ 4.3 billion, for forex market manipulation, last month, RBS has now suspended five employees in relation to their own internal enquiries. (The bank has not made a profit since 2007 – with its 2014 loss of US$ 5.4 billion an improvement on the preceding year’s figure of US$ 13.9 billion). It seems that government agencies have finally woken up to this scandal and there are several on-going investigations by regulators into the massive US$ 5.3 trillion a day market.

Sad news for senior staff at UK banks, as reports indicate that bonuses will be 15% lower than last year. It is expected that the bonus pool for staff at Barclays, Lloyds and RBS will be US$ 4.3 billion. The much troubled HSBC saw a 17.0% fall in 2014 profits to a mere US$ 18.7 billion but has apparently reported that bonuses will only be 7.0% down on last year. Chief Executive, Stuart Gulliver, has to make do with his total package down 5.4% to US$ 11.74 million. HSBC’s Chairman, Douglas Flint, and Mr Gulliver have been hauled before the UK MPs’ Treasury Committee and forced to apologise for “unacceptable” practices in its Swiss private bank. It seems that the bank’s internal controls did not pick up these anomalies and neither did the auditors nor the government regulators.

It is obvious from events this week that there are endemic problems with organisations’ systems and procedures, with the House of Westminster joining the banking industry. Two heavyweight UK politicians, and both ex-Foreign Ministers, Jack Straw and Malcolm Rifkind, have been caught in a sting operation over cash for access claims – and both, not surprisingly, deny any wrongdoing! The former was recorded on how he operated “under the radar” and got paid US$ 93k annually for using his influence to change EU rules.

Meanwhile Rifkind, who was also chair of the parliamentary committee overseeing Britain’s intelligence services, boasted of his contacts and offered his “services” for up to US$ 12k per half day, whilst claiming that MPs could not live on their US$ 104k salary. It is reported that among his directorships, he receives US$ 133k (Unilever),  US$ 54k (Adam Smith) and US$  39k (LEK Consulting).

Apparently the following current serving MPs are the three biggest earners – Gordon Brown, Geoffrey Cox and George Galloway. In 2014, the former Labour PM earned US$ 1.49 million, on top of his parliamentary remuneration, including US$ 95k for a speech in Beijing and US$ 72k for speaking at the American University in Dubai. He also holds positions as Chairman of the World Economic Forum Policy Coordination Group, Distinguished Global Leader in Residence at New York University and United Nations Special Envoy for Global Education. The Conservative Cox made an extra US$ 1.27 million mostly from his legal work, with almost 2k hours of work registered (including from previous years). The third major earner was George Galloway with US$ 465k.

Then there is FIFA where there either has been a breakdown in internal control or it has never existed. How can such an august body take a year to realise that it is too hot to play football in Qatar in July? Or did they have other plans?

To the outsider, the banking industry, politicians and FIFA represent an old boys’ club with their own internal rules and modi operandi.

In the UK, the government is clamping down on “cold calling”. It is taking a more stringent approach with the prospect of larger fines and making board-level executives responsible for nuisance calls and messaging. Its aim is to stop companies bombarding the general public with unwanted marketing calls and texts. There will be many financial advisory companies in Dubai hoping that the same approach does not happen here but until it does, Don’t Call Me!