What a Wonderful World 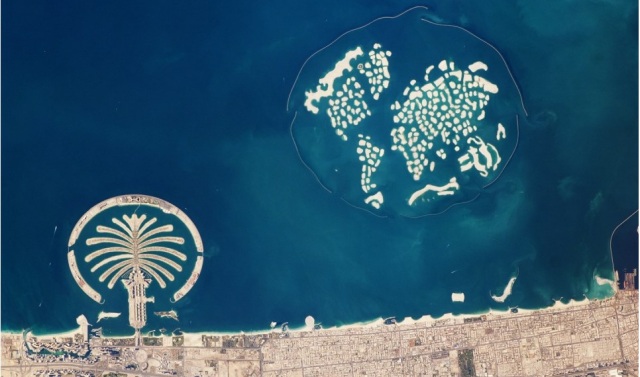 The headline of the week was Sheikh Mohammed bin Rashid Al Maktoum’s approval of US$ 1.2 billion worth of projects, the largest of which was the US$ 680 million development of the Madinat Jumeirah resort in Umm Sequim to be ready by 2015. There will be a 450 room expansion to the hotel along with 45 residential villas, the ubiquitous retail area and restaurants. Other developments announced were a pedestrian crossing over Dubai Creek, dredging of the new Business Bay Canal (US$ 410 million) and a new police barracks (US$ 105 million).

As most of this is labour intensive, it is expected that there will be a surge in employment opportunities which will have a ripple effect on other sectors of the economy. Tourism will also get a shot in the arm with these added attractions.

Although still paying off mind-boggling loans, which could be in the region of US$ 15 billion, Nakheel is being very bullish in its outlook. The state owned developer has just completed land deals in Palm Jumeirah (US$ 114 million) and Jumeirah Village (US$ 31 million). It is thought that land prices on Jumeirah Palm have risen 30% in the past twelve months – a sure sign that Dubai is back in business.

The other major player, Emaar Properties, plans to build a further 250 villas in Arabian Ranches. The new Casa community will also have schools, eateries and a health club and will be completed by the end of 2014. Already Arabtec have been selected by Emaar to build 33 villas and 62 townhouses in the development.

On the corporate side, shares in the troubled Dubai-based fit-out company, Depa, jumped more than 46% – from US$ 0.30 to US$ 0.44 – on Wednesday with news that Arabtec was acquiring 25% of its capital for US$ 66 million. This comprised 150 million shares for US$ 0.44 each which are traded on Nasdaq Dubai. The other local bourse continued in negative territory with the Dubai Financial Market Index falling 20 points over the week to close on Thursday at 1597.

Drake & Scull, the local contractor, which announced dismal Q3 results, had better news this week on two fronts. First, its German owned subsidiary, Passavant-Roediger, won a US$ 46 million contract for a Vietnamese water treatment plant. More significantly was that Goldman Sachs bought US$ 40 million worth of warrants which can be converted into cash after five years.

This week the International Jewellery Week opened with 320 luxury brands from 25 countries on display. The show’s highlight is a unique 214 carat diamond with a mere US$ 1 million price tag.

The local jeweller, JoyAlukkas, is planning to invest US$ 1.8 billion in an expansion plan that will see 200 new outlets in the Gulf and India with an estimated expenditure of US$ 9 million per shop. Currently it has a portfolio of 85 stores, with manpower of over 6,000.

Dubai’s GFH Capital, a subsidiary of the Bahraini group, Gulf Finance House, finally signed a deal taking over the English football side, Leeds United. With the likes of Ken Bates and Neil Warnock associated with the club, it will be interesting to see how they get on with their new owners.

In 2011, the US exported over US$ 1 billion worth of agricultural goods into the country and are hoping to reach US$ 1.2 billion this year. Segment-wise the biggest increase was seen in consumer-ready goods where there was a 19.8% jump to US$ 635 million. No wonder then that there are 17 US exhibitors at this week’s Sial ME Food Exhibition.

Dubai will host the region’s first data hub catering to both local and international companies for storing their data. Du has tied up with the US company, Equinix, with both parties each investing US$ 40 million in the enterprise. The facility, initially hosting 650 cabinets, will open for business in January 2013.

Coutts, the London private bank, has just opened its regional office in the DIFC. The bank joins a long line of financial institutions and other international companies which have seen the benefit of using Dubai as a regional hub for business.

The number of UAE road fatalities fell by 17.4% to 450 and there was a smaller reduction (7.7%) in the number of injuries during the first nine months of the year. It may be interesting to note that 2011 (twelve months) road deaths in the UK and Australia came in at 1,901 and 1,292 respectively.

Overseas, former UBS bank trader Kweku Adobo, having lost the prestigious Swiss bank US$ 2.3 billion, was sentenced to 7 years in jail for fraud. The fact that he was only authorised to trade to a limit of US$ 100 million, and at one stage could have cost the bank US$ 12 billion, says much for the bank’s cavalier attitude to making money at all costs with apparently minimal internal control procedures in place.

One of the former stars of Silicon Valley, Hewlett-Packard Co, has fallen from grace with its share value dropping US$ 135 billion since its 2000 high of US$ 155 billion. Along the way there have been many a disaster but none moreso than the one revealed this week. The company announced a US$ 8.8 billion write down, including US$ 5 billion for its UK software division, Autonomy, after discovering serious accounting improprieties. Autonomy was bought for US$ 11 billion two years earlier so there are bound to be questions for the Board and their auditors, Deloittes and KPMG. (In future, HP should stick to making brown sauce).

In the US, Matthew Martoma has been charged with insider trading shares involving two pharmaceutical companies. The defendant worked as portfolio manager for CR Intrinsic, a SAC capital fund, with US$ 14 billion worth of hedge funds, founded by Steven Cohen in 1992. These bring back painful memories and hopefully are not a precursor of similar frauds such as WorldCom and Enron seen at the turn of the century.

The head of the Fed, Ben Bernanke, has warned that the economy is being dragged down by political inaction failing to get on top of the fiscal cliff problem. In the event of no solution, tax rises and spending cuts will automatically take place on 01 January 2013. If this were to happen, there is the inevitability of the world’s largest economy sliding into recession with the knock-on effect felt all over the world.

The splits in the EU came to the fore this week with political leaders failing to compromise over future EU budgets. It does seem paradoxical that the Brussels bureaucratic machine is looking to increase its spending as all its member countries are slashing theirs. After two days of deliberation, the only resolution was to discuss the matter further in the new year.

Further bad news for the UK with the government having to borrow US$ 13.7 billion more than it did in the previous month and 45% up on October 2011. With the economy in slowdown, there was a 10% reduction in corporation tax receipts which was the main reason behind these disappointing figures.

Recent blogs have highlighted the economic mess in both Spain and Greece and now Italy is moving into the spotlight. As Europe’s third largest economy, it has grown less than its partners over the past twenty years and the problem has been exacerbated by political ineptitude, sluggish growth and debt. The country has government debt at 120% of GDP – second worst to Greece in the EU. It has foreign debt of over US$ 1 trillion and sees 16% of its budget paying interest on its formidable debt. Like Spain, its regions have their local economic problems and it seems likely that fiscal problems in Sicily may be a tipping point in Italy’s demise.

Even the relatively stronger European economies are beginning to feel the strain with the like of France losing its AAA credit rating whilst the Dutch and Austrian economies contracted 1.1% and 0.1% in Q3. Overall the eurozone economy shrank again in Q3 indicating that the bloc is still in recession with a long way to go before any sustainable recovery is in sight.

Nearer home, the Morsi government has almost engineered a US$ 4.8 billion loan from the IMF which will restore confidence in its economy battered by two years of political turmoil. Egypt is trying to bring down its budget deficit from an unsustainable 11% to a more manageable 8%.

In contrast, the confidence in Dubai is palpable. With major sporting events – DP World Race to Dubai featuring the European Tour’s top 60 golfers, the Emirates Rugby Sevens and the World Sky Diving Championship – concerts (J Lo, Usher and Katy Perry) and the country’s 41st National Day fast approaching, there cannot be many better places  than Dubai. What a Wonderful World!