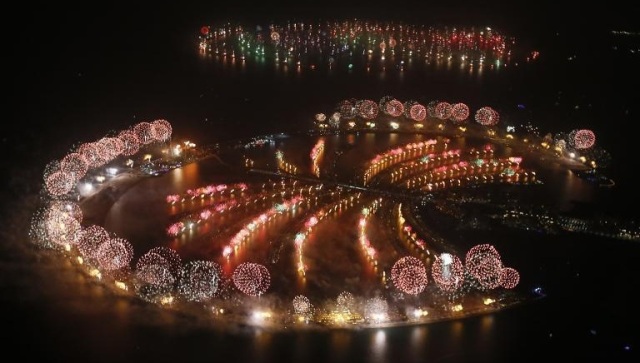 At the same time, as property prices have surged more than 20% in 2013, Knight Frank’s Prime Global current year forecast is predicting that, although growth levels will weaken, Dubai will still lead the world with another annual double digit growth forecast of up to 15%, well ahead of Beijing, Shanghai, Paris and Sydney, with estimated rises of between 5 – 10%.

There have been moves afoot to curb too much real estate speculation by the UAE Central Bank doubling its stamp duty equivalent to 4%, banks discussing mortgage deposit increases to 25% and Emaar banning agents selling off plan inventory before completion.

Meanwhile commercial property is beginning to fight back with Dubai now the 23rd most expensive city according to a CBRE report. At US$ 93 per sq ft, prime Dubai office space has still a long way to go to equal the most expensive location, London’s West End, at US$ 259 per sq ft, followed by Hong Kong (US$ 234) and Beijing (US$ 198).

With the groundwork now complete, Nakheel is expected to award the construction tender for its 136k sq mt The Pointe. The entertainment and retail complex, with over 800 outlets, will be located opposite Atlantis on Palm Jumeirah. The company has also recently sold 91 plots in its Al Furjan project for US$ 19.1 million and a further 45 in Jumeirah Village Triangle for US$ 17.9 million.

Reports indicate that local airlines are cashing in on next year’s FIFA World Cup by increasing prices to Brazil by as much as 70% in June (as compared to March). As an official “FIFA partner”, Emirates June economy fares are quoted at US$ 2.9k, whilst business class comes in at US$ 8.3k.

November saw yet another record month for Dubai International with a 9.5% year on year jump in passenger numbers to 5.34 million. With YTD figures of 60.4 million, 2013 should prove yet another record year, with numbers nudging 66 million by the end of December.

These numbers explain the surge in Dubai Duty Free results as the company announced an annual 11.4% increase in its 2013 sales to US$ 1.81 billion.  20 December saw the operator celebrate its 30th anniversary, with sales on the special day  reaching over US$ 30 million, with some items being sold at a 30% discount.

There is no stopping the current on-going hospitality boom with the release of official November figures. These indicate hikes in RevPAR (revenue per available room), occupancy and ADR (average daily rate) by 11.5% to US$ 264, 1.7% to 87.5% and 9.8% to US$ 301 respectively. Supply was also up by 6.9% which was more than offset by an 8.8% jump in demand. It would be no surprise to see guest numbers test the 11 million level by the end of the year.

The 19th edition of Dubai Shopping Festival takes place from 02 January for a month, during which time it is expected to welcome over 4.4 million visitors. It is estimated that since its opening in 1996, it has attracted over 51 million visitors who have added over US$ 35 billion to the local economy.

Arabtec announced that it would set up a real estate development company in Dubai to take advantage of any local projects. The Dubai-based company has over US$ 8.1 billion in its order book. Among its investments to date is a 24% holding in Depa Limited, whose shares have shot up over 8% since Arabtec announced it was interested in more investments and acquisitions.

Majid Al Futtaim (MAF) is planning a US$ 467 million investment for a shopping centre in Muscat. The Mall of Oman will cover an area of 157k sq mt and host over 350 retail outlets. Meanwhile, Al Futtaim Group has just signed a JV – with Marjana Holding and Portugal’s Sonae Sierra – to develop Morocco’s largest shopping mall. 21.7% of the retail space of 126k sq mt will be taken up by Ikea. This is the Dubai-based conglomerate’s fourth shopping centre, with the others located in Oman, Qatar and Egypt

The Dubai Financial Market capped a boom year by closing at 3370 points – 21.96% up on Q4 and 107.7% for the year. On Thursday, the first day of trading in 2014, it showed a daily jump of 3.04% to close the week on 3472.The last time the local bourse had such a stellar year, the exact opposite happened the following year. History is unlikely to repeat itself but the market will definitely slow this year, with a possible correction on the cards.

Gold lost its glitter in 2013 with an annual fall of 28.9% from US$ 1,694 to US$ 1,204, bringing to an end a 12 year bull run. Gold is no longer considered a safe haven during troubled economic times. It is set for another difficult year and would do well to test the US$ 1,300 mark in coming months, especially if inflation takes hold on the back of global monetary policy and devaluing exchange rates, causing reductions in purchasing power.

All the so-called “fragile five” economies with widening current account deficits – Brazil, India, Indonesia, South Africa and Turkey – will face major problems in 2014, mainly as a result of the Fed’s cutting back on its QE policy of easy money. Turkey has been worst hit as the lira falls to record lows, not helped byan increase in political turmoil and its biggest ever corruption scandal involving sons of three cabinet ministers.

For the past three years, oil prices have remained static, averaging US$ 108. With an expected increased output and slowing demand, as the world economy continues to struggle, 2014 will be a volatile year and Brent prices should even out to around US$ 100 later in Q1.

There is no doubt that the global stock market rally seen in 2013 will run its course early in the new year, as the five-year US equity bull market, with record highs for both the S&P 500 and Dax, comes to the end of its cycle.

Two factors that will trouble the Chinese authorities are a marked slowdown in manufacturing, as a result of a weak demand for exports, and a massive surge in public debt, that has fuelled a real estate boom. A 2013 growth rate of 7.6% is the slowest in twenty three years and no improvement is expected in 2014.

Although the UK economy is set to strengthen even further in 2014, the same cannot be said for most of its European neighbours including France and Italy. President Francoise Hollande has had a torrid year with the country falling further behind under a “too heavy” tax burden as unemployment hovers at 10.9% and manufacturing output worsens. He would do well to still be in the job at the end of 2014. In a similar vein, Italy has much to do to reduce red tape and introduce much-needed economic reforms, so as to improve productivity.

Dubai will remain streets ahead of most other economies in 2014 and the only note of caution is that the emirate cannot expect extraordinary growth in the stock market, property and other sectors of the economy to continue at current levels. Furthermore if the Iranian entente cordiale were to come to fruition, it will be a huge boost for the region.

In the global arena, economies will be sluggish at best. What is not wanted is a catastrophic incident to occur that would derail any progress that has been made since the GFC. Fingers crossed that there are no problems with the Winter Olympics and the FIFA World Cup and that some major financial scandal does not Rock The Boat!