Spirit In The Sky! 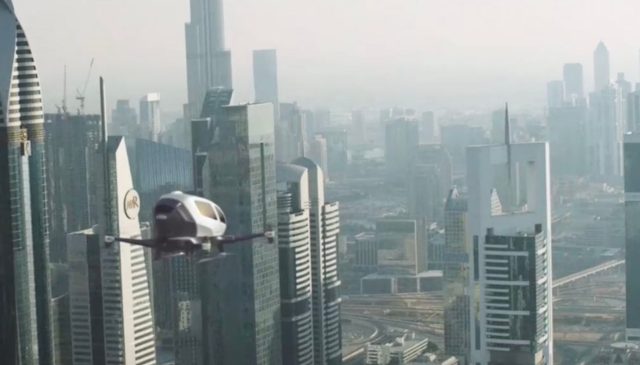 The latest Asteco report indicates that this year 31.5k apartments and 12.5k villas are scheduled for delivery, compared to actual 2016 completions of 8.8k and 5k. That being the case, there could be a further softening of the market; however, if past history is anything to go by the actual handovers at the end of 2017 could be half of that total. Furthermore, Dubai’s population is expected to grow by at least 150k – all of whom have to be housed (admittedly not necessarily in the emirate). This would see a supply shortage with the obvious conclusion that prices will rise – by how much is the US$ 64k question.

Azizi Developments is to build 180 residential and retail units in Meydan One – a community that will be home to a shopping mall, with a 150mt x 80mt retractable roof, the world’s largest “dancing fountains”, an indoor ski slope, a 4km canal and a 300 mt “beach”.

Earlier in the week, the first Trump-associated property to open since the president’s inauguration was The International Golf Club in Damac Hills (formerly Akoya). The president’s two sons, Eric and Donald Jnr, who now control the Trump empire, were at Saturday’s glitzy launch.

Danube Properties’ US$ 109 million Miraclz Tower, with 591 apartments (ranging from studio – 2 bedroom), has already been 95% sold – a sure indicator of the buoyancy in the affordable housing sector.

With infrastructure design by Dar Al Handasah almost 80% complete, Nakheel will recommence work on the 266 mixed-use Madinat Al Arab. The 522 hectare site, ideally located close to the Dubai World Central mega-airport, the Expo 2020 site and the newly-opened theme parks, is a major part of Waterfront project

Nakheel also reported that it had begun work on a 55-storey residential tower, adjacent to The Gardens community. The US$ 232 million Ibn Battuta Residences 2 will have 279 apartments, along with retail space and a multi-storey car park, and is in addition to the developer’s 48-floor twin tower project, housing 531 units, announced last year. The company will also increase its current retail space by 53k sq ft, introduce a 16-screen dine-in cinema complex and add a further 600 parking spaces.

With the Dubai Marina Yacht Club closing its doors in January, Emaar has announced that a Vida hotel will be built in its place. It is expected that the new building will house both a hotel and serviced apartments but as yet no further detail are available.

DXB Entertainments (60%) and Merlin Entertainments Group (40%) have joined forces to build the region’s first Legoland Hotel adjacent to Legoland, part of Dubai Parks and Resorts. Every one of the 250 rooms will have a Lego theme to it.

With the commercial property sector finally showing signs of recovery, a recent Knight Frank report indicates that rents will remain flat, as premium locations see new supply eating into any potential upturn, whilst lesser grade buildings may witness a slight decline. 2016 was a year blighted by a slowing local economy and marked employment cutbacks in certain sectors which had a negative impact on the Dubai market.

It was no surprise to see the retail sector continuing to struggle for a variety of reasons including a strong greenback, low consumer confidence, a dip in shoppers’ purchasing powers and a flattening of the sales curve. Despite these problems, the larger, better managed malls continue with high occupancy levels but with new supply coming on line, and a growing demand for online shopping, 2017 could present further problems.

According to a recent Cluttons report, demand for Dubai industrial realty has fallen on the back of a sluggish global economy and an increase in the supply of new warehouses. With capital market values slipping across the board – but markedly in older stock – there is now opportunities for purchasers to buy in the hope that the bottom of the market has been reached, especially with Expo on the horizon and oil prices nudging higher.

5-year old Snapchat has opened its first ME office in Dubai Internet City, as it tries to extend its reach in the area, targeting advertisers in the UAE and Saudi Arabia. The company, that could be valued up to US$ 25 billion, currently has 150 million active daily users.

The doom and gloom merchants will be surprised to read a report from BNC’s Construction Analytics that indicates that Dubai has 4k active construction projects, valued at an impressive US$ 313 billion. Of this total, 3.2k can be found in the emirate’s urban construction sector, accounting for 78.3% of the total spend (US$ 245 billion).

The RTA will buy 200 Tesla electric vehicles (Model S sedans and Model X SUVs), fitted with autonomous driving technology, for use in its limousine taxi fleet. At the same time, it was announced that the US company would also open a Dubai office for distributing and maintaining its vehicles.

Al Khaleej Sugar Refinery announced that in November it delivered 404k tonnes of white sugar – the largest ever quantity by a single deliverer. The Al Ghurair company is the largest global port sugar refinery, with 50% of the product destined for the UAE market.

UAE’s love affair with Mars continues. Last November, HH Sheikh Mohammed bin Rashid Al Maktoum approved the country’s Mars Hope probe, scheduled to reach the red planet in 2021; now the Ruler has announced the Mars 2117 project which targets a miniature city being built there within the next century.

In a bid to increase their flagging non-oil revenues, the 6-country GCC bloc still hopes to introduce a 5% VAT on 01 January 2018. However, it appears likely that UAE will lead the rush and that some other countries will delay implementation until procedures are in place. Currently, the government would want the tax levied across the whole economy but may well look at education, healthcare, renewable energy, space, technology, transport and water in a more sympathetic light. The cut-off for registered companies may start with revenues as low as Dhs 365k but residents will have to wait and see until the UAE VAT law is finally approved and enshrined into law.

Currently, only individual emirates can issue sovereign bonds but this is set to change with the federal government introducing measures that could see the country doing likewise. Funds raised in this fashion would be utilised mainly in the banking sector, as a means for the Central Bank to better manage its liquidity requirements.

Dubai Investments has  made a US$ 51 million profit as it sold its 100% stake in Marnum Holding and United Sakes Partners to Elite Agro.

Dubai Investments, a conglomerate in which sovereign fund Investment Corp of Dubai owns an 11.5 percent stake, has announced that its wholly-owned subsidiary Dubai Investments Industries Al Mal Capital PSC has acquired its second US investment – the 153k sq ft Poinsettia Plaza shopping centre in Ventura, California; it had exited its first US foray – a Louisiana residential complex – in 2015. This week, the company has also made a US$ 51 million profit as it sold its 100% stake in Marnum Holding and United Sales Partners to Elite Agro.

As part of its continuing expansion strategy, Dubai Investments Industries have invested US$ 300 million in various global sectors; these include Emirates Aluminium Rolling (US$ 30 million), Kings College Hospital Healthcare (US$ 50 million) and Modul University Dubai (US$ 9 million).

Dubai Islamic Bank increased its sukuk listing on Nasdaq Dubai to US$ 4.25 billion, with a US$ 1 billion issue on Wednesday. The local bourse is now considered the largest global venue for sukuk listings, totalling US$ 47.8 billion.

With the 2016 reporting season in full flow, there were many results announced this week – some good, some bad. As 2016 group revenue increased 1.9% to US$ 14.27 billion, Etisalat posted a 1.9% rise in profits to US$ 2.29 billion. Meanwhile, the country’s second telecom, Du, disappointed the market with a 20.0% slump in Q4 profits to US$ 101 million; some of the fall has been attributable to higher government royalty payments.

On the other hand, Arabtec is going through a torrid time and its Q4 and 2016 results do not make happy reading. The Dubai-listed contractor posted a Q4 deficit of US$ 804 million, more than seven times the US$ 110 million recorded last year, and an annual loss of US$ 929 million (compared to US$ 640 million a year earlier). The board has agreed to a US$ 409 million capital restructuring plan.

Despite a 35% hike in 2016 revenue to US$ 79 million, Marka reported an annual loss of US$ 7 million. The Dubai-listed group still remains confident with the regional retail sector, despite the current difficult economic environment.

Gulf Navigation recorded their best annual figures since 2008, as profits surged by almost sevenfold to US$ 37 million, with Q4 returns 20.0% higher at US$ 1.5 million. However, much of the gain arose from a US$ 25 million write back of a “derecognition” of liabilities.

Dana posted major falls in both Q4 and 2016 profits by 94.8% to US$ 7 million and 77.1% to US$ 33 million respectively. It is estimated that the company is still owed nearly US$ 1 billion from debtors in Kurdistan (US$ 713 million) and Egypt (US$ 265 million). This week, the Dubai-listed company won a ruling in its four-year dispute with the Kurdistan administration over certain rights and outstanding payments.

Latest figures indicate that the 11-member OPEC cartel has cut production by about 1.2 million bpd to 29.92 million bpd largely in line with cuts agreed late last year. At the same time, Russia and ten other countries had agreed to reduce by 0.6 million bpd but have only managed 40% of that total.

It is reported that talks between Abu Dhabi’s IPIC and Malaysia’s 1MDB fund have broken down at the London Court of International Arbitration. The case could drag on for a further 18 months before a decision about the Abu Dhabi state fund’s US$ 6.5 billion claim could be reached.

With a Q4 GDP growth of 0.2%, Japan recorded an annual gain of 1.0% (well down on the 1.4% growth forecast expected at the end of Q3); although the figures disappointed the market, the country has recorded growth for four straight quarters.

China reported its lowest level of foreign exchange reserves in almost six years, with a January return of just under US$ 3 trillion. The prime cause was the weak yuan which fell by 6.6% to the US$ resulting in the Central Bank having to prop up its currency by selling its dollars. (interestingly, Germany has a bigger current account surplus than China whilst the USA has the world’s biggest deficit).

However, the country’s 2016 trade deficit topped a massive US$ 502 billion – its highest level since 2012. The main driver behind this was the strong greenback as trade deficits with China, Japan and Germany fell to US$ 347 billion, US$ 65 billion and US$ 69 billion respectively.

January inflation figures saw the UK’s consumer price inflation rise two notches to 1.8% – its highest rate in over 30 months – driven mainly by the weak pound pushing up imported prices. This is in line with the Bank of England’s forecast of inflation touching 2.0% in Q1 and rising to 2.7% over the next twelve months.

This week, the RTA announced a world first – the trial run of a successful autonomous aerial vehicle (AAV) capable of carrying a human. The Chinese-built EHANG 184 has been compared to a driverless flying car, capable of carrying a passenger for a maximum of 30 minutes at a cruising height of 3k ft, with a speed of 160 kph. The craft, with eight main propellers, will allow a passenger to choose a selected route and then sit back and land at the chosen destination. Come July, Dubai residents could see more than a Spirit In The Sky!